In 1824, the French aristocrat Lafayette (Marie-Joseph Paul Yves Roch Gilbert du Motier, Marquis de La Fayette), who had played a key role in securing victory over the British during the American Revolution, was invited by President James Monroe to visit the United States, then about to celebrate its 50th anniversary.

Upon his arrival on Staten Island, the general was greeted with open arms. He had been a favorite of General Washington, who had acted as a surrogate father to the young Lafayette.

As an advocate for democracy in both the American colonies and in France, and a proponent of abolition, the Frenchman was warmly welcomed on a thirteen-month tour of the United States. His visit spanned a highly controversial 1824 presidential election season in which the House of Representatives selected John Quincy Adams over the highest vote-getter, Andrew Jackson. Lafayette has been seen by historians as a uniting force, whose presence served to remind Americans of their mutual bonds. 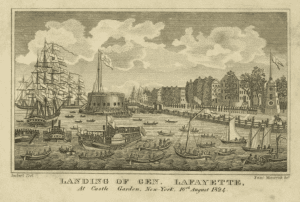 In preparation for the 2024-2025 bicentennial of Lafayette’s tour, 175 historical markers are being erected to memorialize this seminal event and the unifying effect it had on the young country. An interactive map of the general’s tour in the fall of 1824, can be found online. The 25-state initiative is sponsored by the Lafayette Trail Inc. and the William G. Pomeroy Foundation.

The first two markers placed by the NYDAR were unveiled in May, one at Fort Hamilton in Brooklyn and one at Niagara Falls, with National Society President General Denise Doring VanBuren and State Regent Patrice Birner in attendance. The NYDAR is funding the placement of 10 markers in the state that will be joined by additional markers sponsored by the Pomeroy Foundation.

The Hendrick Hudson Chapter of the Daughters of the American Revolution will host a June 13, 2021 program by New York State DAR Regent Patrice Powley Birner about the Lafayette Trail. Birner will speak about Lafayette’s tour, his legacy, and the commemoration of it via the Lafayette Trail, which is the project that she as State Regent has made central to her administration. She previously served three years as State Historian for the NYDAR.

This program will begin at 2:30 pm, and is free and open to the public. Preregistration is required and can be completed online.

For more information on the Hendrick Hudson Chapter of the DAR, visit their website or call (518) 828-9764.